Since the late nineteenth century, the F.lli Fulvi (Fulvi Bros) company devoted itself to salting, seasoning and distributing wheels of Pecorino Romano cheese (salty cheese made out of sheep's milk) produced by the shepherds from Viterbo and Agro Romano (a geographical rural area - part plains, part hill - that surrounds the city of Rome). At the beginning of twentieth century, in an establishment of Viterbo, the Fulvis started to produce on own account and began exporting the product to the United States of America under the name of "Fulvi Genuine", reproducing on the label the anchor image, symbol of the companies that carry out maritime transport.

In 1957 Fulvi S.p.A. created a new complex in Nepi (a town next to Viterbo), an area which enjoys optimal environmental features for the production of cheese, especially the Pecorino Romano. Nowadays, this structure is still the location of the manufacturing facilities of production, maturation and commercialisation.

Today, the company I Buonatavola collects and keeps the traditions of the original business, gathering them into a cuttin-edge factory that makes traditional crafts as its strong point. The current production, composed of typical cheeses of the Roman countryside, fulfills the increasing and diversified demand of the intern and foreign market: the Pecorino Romano Lazio D.O.P., produced with Genuine Fulvi brand, is still exported with great success to the US. 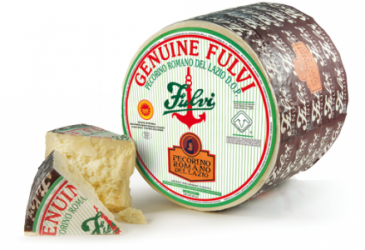 made out of sheep's milk from Lazio

The combination between tradition and innovation has made the company I Buonatavola one of a kind, capable to marry a modern production process with the preservation and respect of craftsmanship and authenticity.

"In other places one has to search for the important points of interest; here they crowd in on one in profusion. Wherever you turn your eyes, every kind of vista, near and distant, confronts you palaces, ruins, gardens, wildernesses, small houses, stables, triumphal arches, colums all of them often so close together that they could be sketched on a single sheet of paper. He ought to have a hundred hands to write, for what can a single pen do here? And besides, by the evening one is quite weary and exhausted with the day's seeing and admiring".
(Rome, 5th Nov. 1786)